My first Christmas in Austria 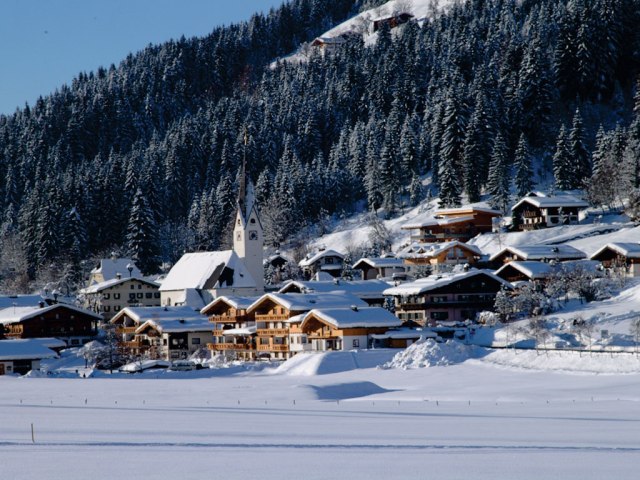 A special throwback Thursday: My first Christmas in Austria

Some of you know I keep traditions from my time in Fieberbrunn and Munich at Christmas. Last summer, while poking around in some files, I discovered that I’d written down a description of my first Christmas in the village of Fieberbrunn in the Austrian Alps. 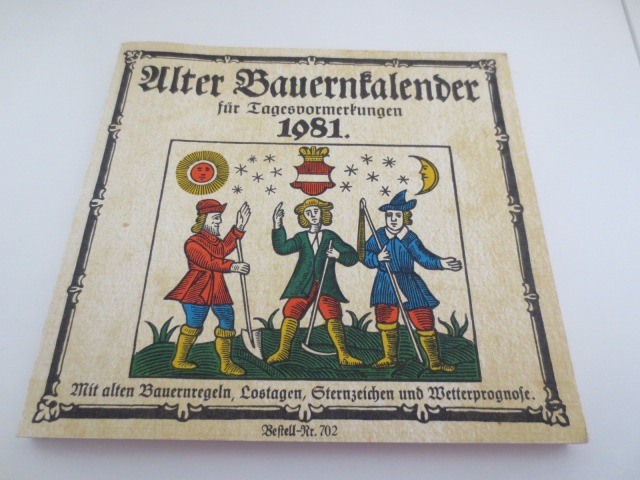 A daily calendar based on an Austrian farmer’s almanac

I wish I’d written more while I was there, but I was so happy that at least I have this!

I arrived in Fieberbrunn September 19, 1980 with the idea that I would visit my boyfriend and that it would be easy to find some sort of job. I already realized I had made a mistake to quit my job in London and come back to the US, and when a friendly note from my boyfriend came that I interpreted as an invitation, I jumped on it.

I stayed with my BF’s family until I was able to get a job as a Zimmermädchen (maid) at a local guesthouse.

Landhaus Pirker, where I worked. Right next to the church, so we heard bells all day long!

December 24, 1980: I worked until 6pm, with the rest of the night off. (PS of course there was snow!) I changed into my best clothes, and walked over to my BF’s house. His four sisters were dressed in their best dirndls and his mother Frau W was wearing a black skirt and white blouse (probably dressy satin). Herr W and the two sons (one my BF) were also wearing their best.

Dinner in the kitchen was wurst and soup, then we all went into their new Stüberl. This is a cozy room with a wood fireplace (but not as we know them in the US) The heat is radiated into the room via tiles—it’s a wonderful cozy warmth.

The new Stüberl was a little like this photo. The house in the photo is open-plan, but in the old homes there is no such thing. Each room is closed off by a door, which keeps things warmer!

We ate cookies and sang Christmas songs. Herr W played the guitar, and two of the sisters played recorders. We said the Rosary and Herr W read aloud the Christmas story from the Bible.

I mostly listened, of course, because my German was still quite basic and I didn’t know the carols except for Silent Night. (I now have a collection of German Christmas CDs, sheet music, a recorder, and learn-to-play the recorder books… And several German/Austrian Christmas books)

The sons fetched two elderly Aunties and we sang some more! Meanwhile Frau W had disappeared. Suddenly bells rang outside the Stüberl door—the Christmas child has come! We all went into the “old” Stüberl, which was like the new except even smaller, with wood paneling and of course a wood stove.

Inside was a beautiful Christmas tree with lighted candles—Frau W had been busy! Straw ornaments, wooden apple ornaments, chocolate ornaments! So simple and beautiful. We sang “Stille Nacht” and then opened presents. Each person’s presents were in a separate stack. There was even a pile for me!

Then the candles were blown out and we went back into the new Stüberl for Cognac. The oldest son drove Frau W, two sisters, and me to midnight Mass in a tiny, beautiful Baroque church St. Jakob in Haus (an even smaller village 10km from Fieberbrunn). Then home under the glittering stars, surrounded by white snow.

I always try to re-create a little of this cozy atmosphere in my own Christmas celebrations.

I have no photos of these events. I don’t know if this is typical of a Tyrolean village, or just my BF’s family, but at that time there was not much personal photography. Of course, when BF and his pals went mountain climbing, there were always slide shows. And there was a tourist business in Fieberbrunn photographing everyone who went through the ski school. But Frau W always said the best photos are in your heart, so I rarely felt like I could pull out my trusty SLR and start shooting family photos. But the sweet memories do remain in my heart.

Back to Munich: The Arrival! (Die Ankunft)

When June 19 arrived and it was actually time to begin my trip to Munich, I was more than a little worried. What would it be like to go back there after so long? Would I be able to speak any German at all? Would I want to? It was my first vacation on my own, not going to stay with relatives or friends. The calendar page in this picture was unwrinkled and pristine, with only the dates of the five opera tickets I’d bought in advance written in. Step into adventure!

END_OF_DOCUMENT_TOKEN_TO_BE_REPLACED

The view from my seat, Il Trovatore at Bayerische Staatsoper. It seemed closer in reality! (something with my camera makes everything look farther away)

Three weeks ago, I was sitting excitedly in my seat at the Bavarian State Opera, waiting for Verdi’s Il Trovatore to begin. All four performances in this short run during the summer Opernfestspiele (Opera Festival) had been sold out for months. In fact, I heard  that they could have sold tickets ten times over. I had (literally) the luck of the draw and was able to buy one ticket–the whole reason for my trip to Munich this summer.

Welcome to the Darkness.

END_OF_DOCUMENT_TOKEN_TO_BE_REPLACED

Since I’m going back to Munich for the first time since 1992 (!) I thought it might be fun to explain my relationship to this city which holds so many wonderful memories for me.

In 1968 I had a semester abroad in Florence, Italy. (Sadly not at an Italian university but with a transplanted group from my own university–I’ll blog about it some day.) We had a break mid-semester, and my friend Barbara and I traveled around Europe, using Europe on $5 a Day as our source for eating and sleeping. Our first stop was Munich.

I remember how shocked I was to see Catholic churches. ONLY Catholic churches. Wasn’t Martin Luther German? Why were there any Catholic churches at all? As you can see, I knew nothing about the Germany of my father’s great-great-grandparents. And that’s the main thing I remember from my first encounter with Munich. We were there for three days, I think, and according to the few slides I have, we went to the top of the Olypmic Tower (which they must have recently finished building), the Deutsches Museum, and wherever the two sculptures I snapped are (I never saw them again).

END_OF_DOCUMENT_TOKEN_TO_BE_REPLACED

Parsifalling: I fell for the Met’s Parsifal (part the first)

I call this “Parsifalling” because I certainly have fallen completely under the spell of that wily wizard Wagner. The music I loved first, but always found the story problematic. This production’s cast, direction, conducting, choreography, design–everything, really–moved me, excited me, and challenged me. I’ve been looking forward to it since I saw pictures and read a review of the original performances in Lyon last year, and not only did it not disappoint, it wildly exceeded my hopes.

It’s hard to explain what is so special about Parsifal. The music, first. But you don’t go to a performance of Parsifal: you experience Parsifal. It’s like a trip–you take a deep breath, the music starts, and you’re on a journey. Surrender to the music and you go Somewhere Else for almost six hours. And you know what? The time flies by.

END_OF_DOCUMENT_TOKEN_TO_BE_REPLACED

This time last week, I was coming home to Durham after an amazing trip to New York. It’s taken me until now to have time to blog about it, but the trip has never been out of my thoughts for the past week. What an amazing time Susan Martin and I had!

It began last year with the 2012-13 season announcement for the Met Opera. The highlight for me was a new production of Parsifal with a brilliant cast. We had to go! (The poster on the right was already up when I visited the Met in May last year.)

Tickets were ordered, plans were made, rooms at the YMCA West Side hostel were booked (months in advance!) and finally the great day came. We flew up to to New York on Tuesday, 26 February and arrived at JFK. We took our usual $7.25 train+subway journey to Columbus Circle (really you can’t beat that price, especially if it’s not rush hour–we could sit down the entire journey). A quick walk up Broadway and we were checking in at the Y. I’ve written before about the Y: it’s not the most elegant place, in fact it’s downright institutional, but where else can you come out of Lincoln Center at midnight and be in your bed in 15 minutes?–and it costs $125/night! END_OF_DOCUMENT_TOKEN_TO_BE_REPLACED

cameras at the rehearsal

What an incredible two days! Although I lost a day at the beginning to blizzicane Nemo, I had the most amazing time at the final dress rehearsal for the Met Opera’s new production of Parsifal. As you can imagine it was a dream come true! END_OF_DOCUMENT_TOKEN_TO_BE_REPLACED

No voices were harmed in the making of this production

Here’s a new blog post from Elisabeth Meister on some of the realities of being a professional singer! Great tips if you’re a singer, and honest and interesting even if you’re not. Go read it now! 😉

No voices were harmed in the making of this production.

I REALLY wish I could have seen The Minotaur in its recent revival at Covent Garden. Here’s a picture with Liz as the Ker:

Eek! and the singing is just as challenging!

On February 16, my friend Susan Martin and I packed our bags into my car and headed north on I-95 . We had a day-long drive ahead of us, but the goal was clear: Jonas Kaufmann was giving a lieder recital at the McCarter Theatre in Princeton, New Jersey, on Thursday evening. Fueled by coffee, chicken biscuits, and artisan donuts (we live in a foodie town), we had an easy drive despite rain for most of the journey.

END_OF_DOCUMENT_TOKEN_TO_BE_REPLACED

Years ago, before the popularity of reading groups, I used to have friends over for a “Literary Tea,” the purpose of which was to tell each other about our current favorite books and persuade each other to read them. Ironically, my modus operandi was the opposite of literary and consisted of my saying I LOVE THIS BOOK! I LOVE THIS BOOK! YOU MUST READ IT!

I feel that way again about my newest opera discovery, Königskinder (Royal Children, or literally King’s Children). I cannot tell a lie, it was this picture that got me interested:

I’d never heard of this opera by Engelbert Humperdinck, composer of Hänsel and Gretel, but who could resist a picture like that?